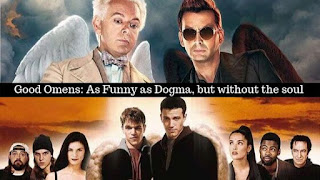 Michael Sheen and David Tennant are fantastic in everything they do. Literally everything. Including Prime's Good Omens. When I saw the preview for this show, I immediately put it on my list. Based on the novella by Neil Gaiman and Terry Pratchett, Good Omens tells the hilarious (and exceedingly British) story of an angel and a demon who team up to stop the apocalypse.

Crowley is the demon who appeared in the garden as a snake to tempt Eve. He is the reason for man's expulsion from paradise. Aziraphale is an angel, one with such a tender heart that he gave his flaming sword to Adam on his way out of Eden. There are lions out there, you see.

Over thousands of years, the angel and demon cross paths many times, often conspiring with each other to get out of work (performing miracles for the angel, tempting good men to evil for the demon). Finally, they are both tasked with helping bring about the apocalypse, specifically, by trying to influence the young antichrist.

The problem? The little boy they think is the antichrist is actually... not. The real antichrist was swapped thanks to a comedy of errors and has lived a peaceful life in the south of England, unmolested by either demon or angel.

Sheen and Tennant are fabulous in their respective roles. Funny, irreverent, whip-smart with the mercilessly dry humor. I enjoyed them very much. But there was something lacking and I found my mind drifting back to Kevin Smith's 1999 film, Dogma, which prompted my parish priest to denounce it as satanic from the pulpit. Obviously, I had to see it.

Far from being satanic, Dogma takes the Catechism extremely seriously and builds its plot on Catholic dogma (hence the name). Like Good Omens, it features two angels, only they're both fallen. And like Good Omens, it uses religion as a point of humor. But that is where the similarities end.

The supporting cast in Good Omens is bland and meaningless. Adam, the little antichrist, is a beautiful child who says very grownup things. And he has friends who are lovely and say grownup things. That is all. There is a witch named Anathema who exists. And there are demons who are very grumpy (in a very British way). Likewise, there are angels who are officious (again, in a very British way. Except Jon Hamm, who is as close to British as an American can get).

Compare that to the supporting cast of Dogma: Jay and Silent Bob, the hilarious yet strangely devoted duo who help Bethany in her quest. Rufus, the apostle of Christ who was left out of the Bible because he's black (played by Chris Rock at the top of his game). Then there's Metatron, the voice of God, played the late great Alan Rickman. He is both funny (hysterically so) and touching. When you walk into an irreverent comedy, you don't expect to have chills run up your spine. But Alan Rickman standing on top of a river, looking down at Bethany and sadly telling her God cannot hear her anguish... that's exactly what happens.

Good Omens had a scene that should have been similarly eerie. In the second episode, we see Crowley and Aziraphale through time as their partnership evolves. One of the scenes is the crucifixion of Christ. This could have been sad, painful, and a chance to see both of these angels' souls (demons are fallen angels). But no. They just cooly remark on it, both very dry and British, neither remarkably impressed by the sight of Divine intervention or human suffering.

I was left feeling bored after a few episodes of bumbling Hugh Grant-esque comedy, waiting for the moment that Good Omens would say its piece, would make me feel something other than mildly amused. But it didn't. There were some platitudes about the environment of course, including the nonsensical idea that nuclear power is somehow evil. But that's it.

Dogma, on the other hand, used dogmatic Catholicism to reach beyond its source material to reveal the truth of the human soul, the danger of obsession, the forgiveness of a loving God... even if the Almighty does look like Alanis Morissette in a flowy dress.

So while I wouldn't discourage you from watching Good Omens (it's only six episodes), if you're pressed for time, maybe just watch Dogma instead.