Morality on the Job: Character Development

Ask a Manager is one of the very few blogs I follow. I check it every single day, delighting in the professional debacles the letter writers find themselves in. Unfailingly, Allison provides spot-on advice, emphasizing professional norms, office culture, and employment law in her responses. To be honest, her site is the reason I made Tess, the protagonist of my upcoming novella, an HR rep. I've never worked in HR, so reading Allison's site and seeing the absolutely unthinkable behavior of some employers made me grateful for literally every job I've ever had. Even the awful ones, because they were still better than some of these poor people's jobs. Don't believe me? A boss directed an employee, on pain of being fired, to leave a note at a grave for a worker who was on bereavement leave. Yeah, someone actually did that.

On the July 10 post, something unusual happened: I disagreed with Allison's advice. You can see the hyperlink, so please read it for yourself, but I will summarize for brevity's sake. An intern at a museum is refusing to participate in a tour for a VIP. She will not do any prep work, nor participate in the tour itself because this VIP is (I assume) a member of the Trump administration. The intern asserts that the Trump administration, and by extension everyone in it, is evil and in favor of genocide, thus she would not normalize this by performing her regular duties.

Don't worry, I will not be debating the merits of her opinions.

Allison's advice was to give the employee a firm talk because she, as an intern, had actively refused to do her job, even threatening violence if she was forced to participate in her duties, and demanded her employer accommodate her. To request accommodations instead of demanding them would have been acceptable, according to Allison.

The comments section, always moderated and on-topic, seemed to split into two factions: commenters who recommended firing for the intern's lack of professionalism and those who advocated accommodating the intern because they were sympathetic to moral objections while on the job.

I was in the first camp. An intern refusing to do her job because she didn't like the customer? What tom-foolery is this? Fire her immediately, says I.

Then I gave it more thought. The moral lines people draw tell you a lot about them and the best books and movies use this tactic to paint their characters in realistic strokes rather than in broad caricatures. I have found myself cheering on fictional characters who defied their duties for a greater moral truth, as I'm sure everyone else has. So where do we draw that line? 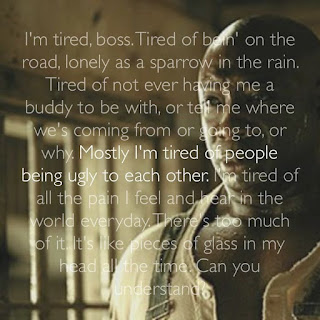 The Green Mile: Based on the Stephen King short story, The Green Mile tells the story of  Paul Edgecomb (Tom Hanks), a prison guard tasked with running the local death row. He is a consummate professional, dedicated to his duty to bring about justice through executing criminals, but also affording those criminals dignity and kindness in their final days. He is unequivocally a good man. But then comes John Coffey (Michael Clarke Duncan, RIP), an enormous man accused of murdering two little children. We come to find out John did not kill those little girls. He was trying to save them when he was found cradling their bodies. Paul knows this, as do all the guards. But he still straps him into the electric chair and performs his duty. He even admonishes a younger guard (Barry Pepper) to wipe the tears from his face so the victims' families don't see. This is his duty, regardless of the innocence of the man he has been tasked with killing. And we see the pain in Paul's eyes as he does what he must.

A Time to Kill: In the movie adaptation of John Grisham's book, Jake Brigance (Matthew McConaughey)  is an attorney for Carl Lee Hailey (Samuel L. Jackson), a man who murdered his young daughter's rapists. No one feels sorry for those rapists, no one worth mentioning anyway. But Jake knows damn well Carl Lee is 100% guilty and by the letter of the law, he should be convicted for first-degree murder. He is an attorney, someone who understands we are a nation of laws, not a nation of men. By all rights, he should negotiate a guilty plea. In the interest of justice. But is it justice? The closing arguments have become a famous scene because they show that "doing your duty" doesn't always mean serving the letter of the law.

House MD: In Season 4 of Fox's House, MD, the core diagnostics team is scattered. House, the temperamental genius, fired one of his fellows and the other two quit. One of them, arguably the most skilled, goes onto lead his own diagnostics team at another hospital. Dr. Foreman (Omar Epps), doesn't last long in his new position unfortunately. He encounters a patient and comes up with a theory of the cause of the illness and determines radiation will cure her. His director tells him no. There is a much more common ailment that the patient is likely suffering from; treat her for that one instead. Foreman disobeys and treats the patient as he sees fit, in the middle of the night so no one sees him.

He is fired by his director, despite his insistence that he was right. And he was. But he had no way of knowing that at the time. It was only an educated guess. It could have easily killed the patient and exposed the hospital to a massive lawsuit. His director gave him no points for his luck and sent him packing, making him go back to work for Dr. House (scene starts at 40:25).  https://www.dailymotion.com/video/x4vr7m0

These characters made different choices depending on their personal situations and their personal moral codes. They are all the heroes of their respective stories, good people who we are rooting for. But we know their minds and their hearts because of the strength of the storytelling. How often do we perceive people in real life as villains, only to change our minds after learning new information?

My point, assuming I have one, is that morality is not black and white. It cannot be. This is true in our relationships and in our workplace. The best way to navigate morality at work is simple: Respect the space and time of others and do not ascribe motives to people who you do not know well. You don't know their mind or their heart; you can't. You only know your own. So live your morals as you see fit... and respect it when others do the same. I think Tess, the HR rep from my novella, says it best:

I get through my days by keeping my face neutral and my mouth shut. If I do speak, it’s to say things like, “I don’t think should is a helpful word to use in this context,” or, “Let’s focus on the way forward instead of on past slights.” I listen, I offer advice if it’s requested, and I keep secrets. The clients think that means I don't judge, so they like me. They sing my praises and write me good reviews on my contracting company’s website. But they're wrong. I judge them unrelentingly. Just silently.