The Power of The Hypocrite in Fiction

You're starving and beating women and children. You take our red cross parcels for yourselves. You don't give us any medicine, not even for the bloody malaria everyone's got. You make us work like slaves. You don't even let us write to our families, and you have the cheek to sit there and lecture us on good manners.

Writers of science fiction and fantasy create strange new worlds, sometimes horrible worlds, that reflect our own. Interspersed with the descriptions of foreign customs and ideals are characters that reflect those in the real world. In almost every book and film, regardless of genre, you will find the Hypocrite. The Hypocrite smiled at us through the warden in Shawshank Redemption, beat us through Sister Bridget in The Magdalene Sisters, and lectured us through Gul Dukat in Star Trek: Deep Space Nine.

The Hypocrite has very strong morals and ideas of what is right and wrong, and is happy to chastise anyone who fails to measure up. He or she is also very likely a control freak and seeks positions of leadership or authority in order to enforce the rules. But in fiction, as in real life, the rules are always for everyone else, not for the hypocrite himself.

These people infuriate us. Never is this more on display than in the news. No one cares if the wealthy porn producer gets caught cheating on his wife of 27 years. No one cares. No one thinks less of him. No one stops using his products. No one gets mad at the quiet book store owner for kissing someone of the same gender. No one cares. Not even a little. But when it's a politician who has spent her career trying to pass laws that interfere with private family life and romantic decisions who has an affair, everyone cares. When it's a pastor of an internationally known mega-church who has been degrading same-sex relationships as being a manifestation of the devil, everyone cares.

Creating hypocritical characters in your book is a valuable tool, as it is something we all understand and, at some point in our lives, have all been guilty of.

Hypocrisy can be used as the fatal flaw of your tragic hero, the blind spot of your unreliable narrator, and of course, the villain of the story.

But more than that, hypocrisy can be a powerful tool for world-building without engaging in an info-dump. Since the customs, morals, and expectations will in some ways be different in your made-up world, having one of the main characters be a hypocrite can make that world compellingly real for your reader.  1984  used this technique in the early scenes where Winston has to position himself in his room so as not to be seen by the cameras—to write in a journal. We don't need massive exposition to realize 1) there are cameras in his house and 2) he's not allowed to write in a journal. Tell me more about this world, we all say. Tell me why this person in charge of re-writing history is breaking the rules he makes possible? 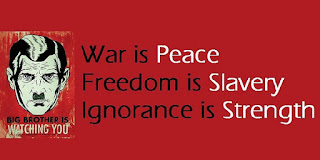 You don't have to reinvent the wheel here. In Sunder of Time (out next year), it's clear in the first chapter that divorce is not allowed in this alternate timeline. And why not? Because the laws of America are based on the Catechism of the Catholic Church. Most people are at least passingly familiar with those rules, so it means less explaining is necessary. It also means that hypocrites are plentiful and shameless, ruthlessly demanding holy behavior from others while flouting Church law themselves. Even in minor characters, this behavior is infuriating and it makes your reader invested in your protagonist and watching as they overthrow this unjust world.