HELSTROM: SUCCESSOR TO SUPERNATURAL - CANCELED BEFORE IT BEGAN 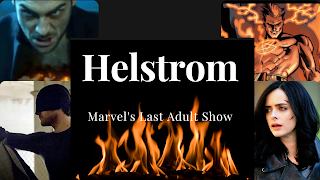 It started off with a whimper. Hulu's latest addition to Marvel TV received almost no fanfare when it dropped. The only reason I watched it is because of a single Instagram ad for the show... one that pinged a memory in my Marvel fangirl brain.

Hmmm... wasn't there a Hellstrom comic book? Could this be the same thing? It was a reasonable question, as the show's title card held no hint of Marvel branding. And the spelling had changed. But I gave it a shot and absolutely loved it. Yes, they had changed the spelling of the Helstrom's sibling's names. Likewise, they didn't mention that Ana's name in the comic book was... Satana. But the show worked. Fantastically.

So why then was it canceled before even one episode aired? In a word... Disney.

Unlike Marvel movies, Marvel TV had been adult-oriented. Shows like Daredevil and Jessica Jones focused on bloody violence and had themes like vengeance and recovering from sexual trauma. These shows were not for children. Which is why they had to go.

Now Marvel still has TV offering on Disney Plus. Wanda Vision looks good. And I haven't seen the ads for The Falcon and The Winter Soldier, but I will likely watch it too. Family-friendly entertainment can of course be wonderful. It can teach us about ourselves and make our hearts soar. But there are some themes, some emotions that can only be touched on with the honesty and grit of adult-oriented television. Marvel was uniquely suited to offer this, as their comic books offered many darker themes for their adolescent readers.

Helstrom was originally supposed to kick off a universe of its own wherein the Ghostrider would become a recurring or even main character. And I think it would have been great. It also would have been great to see how the Helstrom siblings progress in their relationship and continue to fight against demonic forces, much like the Winchester Brothers did successfully for... what has it been, 15 years?

This show could have been the logical successor to Supernatural, which sings its swan song this season. But it seems adult fans of the supernatural will have to look elsewhere for their hard-hitting TV shows. Disney made sure of that.