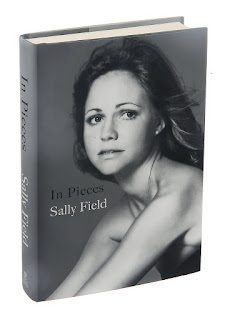 Sally Field recently said in an interview that she was relieved her former partner Burt Reynolds had passed away prior to her memoir coming out because "It would have hurt him." It was one of those stories where I read the headline and dropped down immediately to the comments. Predictably, there were two camps: the Anne Lamott camp, who said, "Girl, that story is yours. Tell your truth." And then there were those I agreed with, who I will dub the reasonable and responsible camp.  We were the ones scratching our heads saying, "If you didn't want him to read it, why did you write it?"

Memoirs are a tricky thing, which is why I will never write one. Never. Not when I'm old. Not even when all of my relatives are dead. Despite my staunch fixation on fiction, I sure do have some strong opinions on memoirs, which largely comes from my work as an editor. I've been working as a professional editor since 2008 and in that time, I've edited A LOT of memoirs. I can count on one hand how many of them were good. But I can count on two hands the number of times lawyers have sent discovery requests to my contracting company for divorce and/or custody proceedings. It turns out that speaking "your truth" has consequences.

In her wonderful book, Bird by Bird, Anne Lamott gives advice to aspiring memoirists. She counsels bravery in telling their stories and fudging some identifying details to avoid libel suits. Her favorite piece of advice is to describe the offending person as having a small penis, as no one would want to cop to that in legal documents. Most of all, Lamott says that these are "their stories" and they shouldn't care if people are mad about them. If the people in question don't like the laundry being aired, they should have behaved better.

But it can get murky in other parental relationships. Commentator Larry Elder often tells a story about his father from whom he was estranged for many years. Hearing it from his point of view would cause anyone to nod in agreement. Damn right, Larry. You cut that toxic person out of your life. Who needs a father who screams at you, who shows no interest in who you are? Not me. And not Larry Elder either.

But then Larry spoke to his father as a grown man, after years of not speaking to him or seeing him. Hearing that his father worked twelve-hour days with people who screamed racial slurs at him and all the sacrifices he made for his children changed Larry's opinion. He was able to look back on his memories from an adult perspective, rather than a child's. It changed his life. It changed how he saw his father and himself.

Now, what if Larry had written a tell-all book about his "abusive" father without bothering to hear his father's side of it? You think that rift would've healed after publicly humiliating his father? Maybe. But probably not. Because contrary to the common refrain, "speaking your truth" in and of itself doesn't actually fix anything. It doesn't raise awareness. It doesn't bring healing to others.

That comes from doing the hard work of a writer. It comes from speaking to other people who were there at the time, preferably people who were adults when it happened. What was going on in the world? How did it affect your little corner of it? These people you're writing about, will they be hurt by what you've written? Do they deserve to be?

A good way to tell if you're making the right choice in your writing is how you plan to publish your work. If you find yourself debating whether to change all the names and places and call this true story fiction to avoid owning your story... that means you have more work to do. Before publishing it anyway. Writing the memoir may be very therapeutic, letting you get your demons out. But publishing it is a horse of a different color. If you haven't done your research or taken the time to be at peace with yourself and your message, you may make a mess. But then again, even if you have all your ducks in a row, you might make a mess anyway.

The important thing is to know that if you're going to make a mess, stand by your mess. Will public accolades and best-seller status be worth torching relationships, ones you didn't anticipate would suffer? If the answer is yes, then by all means, publish that tell-all. But be very careful. Words have power. Underestimate them at your peril.